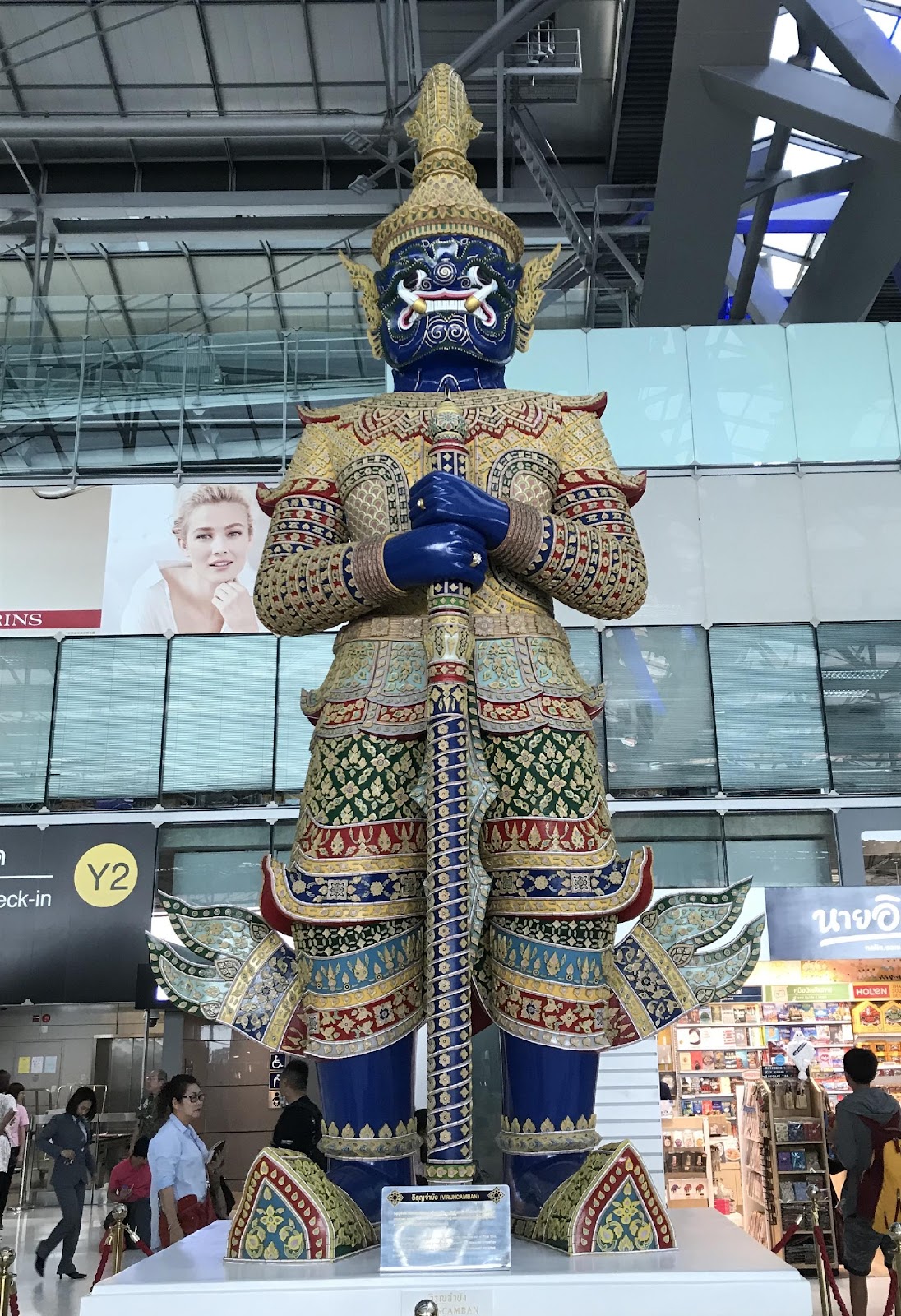 “Happy hypoxia,” or more properly, silent hypoxia, has been one of the most puzzling signs and symptoms of patients presenting to Emergency Rooms with COVID-19. The patient’s arterial oxygen saturation can be in the fifties instead of the normal values in the upper 90s, and yet the patient can be cheerful, fully coherent, and even chatty. Normally, with that low an oxygen concentration in the blood stream, a patient would be in severe respiratory distress.

I experienced silent hypoxia after a visit to Thailand in July of 2018, which makes me wonder: was there a coronavirus lurking in Southeast Asia in 2018 that later mutated to become the killer SARS CoV-2? Did I have SARS CoV-1.5?

Summertime was everything you would expect in Thailand. It was warm and humid, but not uncomfortably so. I had twelve hours ahead of me in the Bangkok Airport waiting for my return flight to Taiwan, then the long leg across the Pacific to Los Angeles. Eventually, I would make my way back to my home in Panama City, Florida, which would also be hot and muggy. No surprises there.

What was a surprise, was that a young lady wandering the airport asked if she could interview me for the Thai Ministry of Tourism. She had official looking IDs, and a load of interview questions. I wasn’t interested, and I was busy, I offered, already tired before the twelve hours of dead time even began.

In truth, I wasn’t that busy, but felt it best not to mingle. I seemed to be the only person not speaking Thai, except for that young lady. Surprisingly,  she had no detectable accent and could pass for a Southern California blond.

After a couple of hours, she returned when I could no longer claim to be busy. She had a simple, youthful attractiveness and an unassuming manner. So, tiring of the boredom of waiting, I allowed her to sit beside me while she started running down her list of tourism related questions.

She wanted to know why I came to Thailand. It was to give a talk at a medical and scientific conference on sports medicine. My subject was “Oxygen,” a fact that would soon become ironic. I discovered later that my travel, ostensibly paid for by the Thai Sports Authority, was bankrolled by Beijing. But I didn’t know that at the time.

For 45 minutes the questions continued. They were business-like, the type of questions I would expect from a Tourist Bureau. But one thing caused me concern, her occasional hacky cough. She insisted it was nothing, and I was not alarmed. I thought no more about it as I finally boarded the plane for the first leg of my long journey home.

Eight hours after my arrival in Panama City, I felt ill as I lay in bed, trying to sleep after being exactly twelve hours time-shifted. I felt sicker by the minute. Jet lag doesn’t do that.

By morning, I had suffered chills and sweats, and my physician son insisted I be taken to the closest Emergency Room. As we neared the ER I felt I was going to vomit, and I leaned into a trash can that my wife brought for that purpose.

The next thing I heard was her screaming at me.

I yelled back, completely confused and annoyed. “Why are you yelling at me?”

“I thought you’d died,” she said. “You sighed, threw your back into the seat, and your arms were stiff and shaking.”

Apparently I had passed out from a drop in blood pressure.  (I had not yet thought about hypoxemia.)

As I was being monitored in the ER, I felt OK. I conversed with my wife, and was half-joking and half-irritated at my unexpected welcome home event.

After awhile, I began to pay attention to the finger tip pulse-oximeter that was monitoring my arterial oxygen saturation. The reading was slipping lower than I had ever seen before, but neither the nursing staff nor the attending physician seemed the least bit concerned. My wife and I continued to chat. I was not in any discomfort, and ignored the monitors until I caught sight of the updated pulse-ox reading. It had plummeted down to a horrifically low 55%.

I told my wife to alert the nurse. They finally started me on a nasal cannula with oxygen. (For those who know, that was an incredibly delayed reaction.) I also knew enough to realize I should be almost stuporous, yet I wasn’t. I was content, except for my circumstances.

Within a few minutes, an ambulance transported me to a real hospital. Being aware of my overseas travel, they assumed I had a pulmonary embolism, which if detected, would have required immediate surgery. But after a perfusion scan, nothing abnormal was revealed.

After settling into a room, I had zero desire for any of the food they brought me. It was all tasteless, and remained that way for two days.

Initially they kept me on 3 liters of oxygen per minute by nasal cannula, which still wasn’t bringing my oxygen saturation above 84 percent. That was a problem.

At the urging of the CDC, the nursing staff came to my room fully gowned and face-shielded, and stuck that infamously long sampling swab up my nose. They tested me for the most recent viral illness in Southeast Asia at the time, the H7N9 Bird Flu virus of 2017. The results were negative.

In spite of my growing displeasure with being in the hospital, and not tolerating the taste, or lack thereof, of their food, I was happy and chatty with the nursing staff. But neither I, a respiratory physiologist, nor the medical staff could figure out what was wrong. My X-rays showed some consolidation in my lingula, a small lobe in the middle of my lungs, but that was not enough to cause hypoxia of the level I was experiencing.

After a while, I began to get a few signs of pneumonia in my lower lung lobes, but not enough to cause any discomfort, or difficulty breathing. While physicians clobbered the growing infection with antibiotics and steroids, I remained happily hypoxic.

After five days in the hospital, and slowly watching my oxygen saturation rise, a respiratory therapist snuck behind me and turned off the oxygen. My saturation remained low, at 88%, but it didn’t drop further. 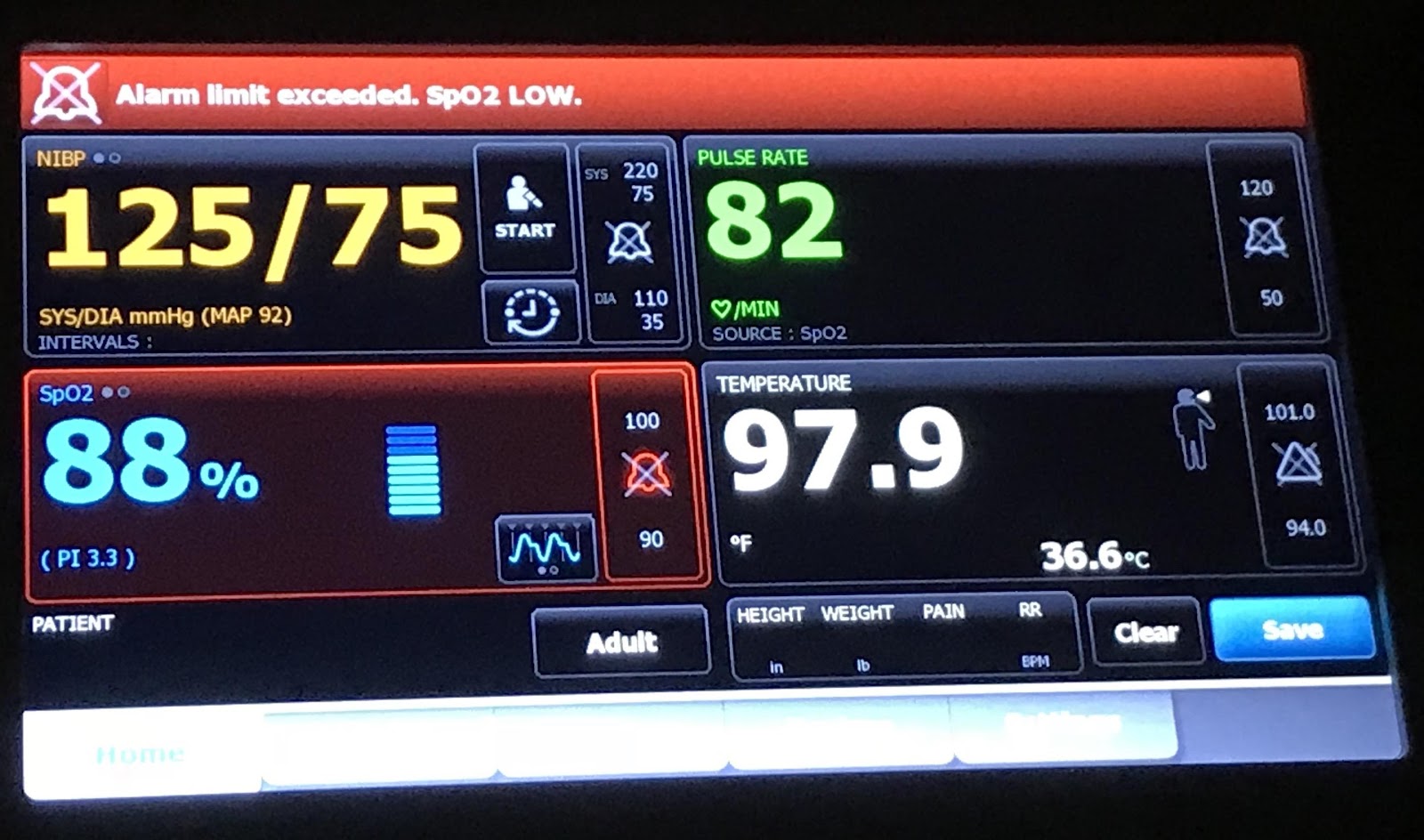 That meant, I would remain on air until discharge. That encouraged me enough to call for a walking test, walking down the hospital corridor breathing nothing but air. Unfortunately, I failed that test, and was sent back to bed.

About that time, a pulmonologist came by and told me I had a good bit of atelectasis (collapsed alveoli or lung sacs) in my lower lobes. Finally, something I could fix. I knew what to do.

I wore out my incentive spirometer over the next couple of hours, and then called for another walking test. The Respiratory Therapist chided me…I would just fail again, she said. But I do love a challenge. With her by my side, I moved slowly down the hall, refusing to talk, and that time my oxygen saturation did not drop.

Due to that walking test, I was discharged from the hospital with an oxygen saturation of 92% and returned home to fully recover. (That is in itself an interesting story which I’ll write about next.)

However, the point of this post is that as I read about COVID-19, I’m finding that physicians are puzzled about some of the same bizarre symptoms I experienced in 2018,  notably  a silent hypoxia. I was never “short of breath” as would be expected with an arterial saturation in the fifties.

From my studies of respiratory physiology, I knew that what had happened to me in 2018 should not have happened, according to the text books. I did not have the SARS virus identified in 2017. But viruses mutate constantly. Could my symptoms have been the signs of a predecessor or cousin to COVID-19? Could it have been an unrecognized COVID-18?

When lungs are not filled with fluid from rampant pneumonia, the most likely way to become hypoxic breathing air is through something called ventilation-perfusion (V-Q) mismatch. A pulmonary embolus can cause massive V-Q mismatch, and can quickly kill if untreated.

However, a recent Science article suggested that COVID-19 might cause microemboli resulting in silent hypoxia. It seems reasonable that enough microemboli, if that’s what it was, could have caused my symptoms in the summer of 2018 without being detected on a pulmonary perfusion scan.

And that worries me for the current pandemic. Summer heat and humidity might not kill this virus. It certainly didn’t kill the virus that I presumably caught from a pretty young girl with a “nothing” of a cough in late July of 2018. It may have been nothing for her, but it was sure something for me.

None of my friends at the medical conference got sick upon returning home. I was the only one spending 45 minutes less than a foot away from that coughing girl. I feel pretty confident where I got it. My only question is, did I pick up a version of coronavirus that was beginning to mutate towards the destructive potential of SARS CoV-2 which erupted just over a year later?

I will provide an update on the results of my antibody test for COVID-19. That could prove interesting.